E-cigarettes are a Dangerous Road for the Addicted 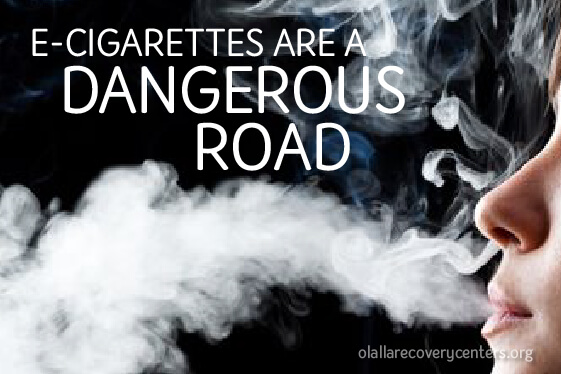 09 Mar E-cigarettes are a Dangerous Road for the Addicted

Posted at 14:04h in Addiction Recovery Blog by Christine Lynch

Electronic cigarettes are the newest trend among young people. The industry claims that they’re not addictive, like traditional nicotine products are, yet the numbers suggest otherwise.

Rates among teens using e-cigarettes have been growing at an alarming pace — a 900 percent increase among high school students between 2011 and 2015.

E-cigarettes are being promoted by the industry as a much safer nicotine product. Advocates claim e-cigarettes are not addictive and can even help people quit smoking.

It’s true that the nicotine amount is much smaller in e-cigarettes. But they’re far from being harmless, especially for youth and young adults.

Advocates often cite a U. K government study that concluded that e-cigarettes have the potential to help smokers quit. However, the U.S. government and health advocates view e-cigarette smoking as a major public concern and caution that there is not enough evidence to support that claim.

If you are struggling with addiction or are the parent of a young person who is fighting to stay clean, you must treat e-cigarettes with great caution. Consider these facts:

Although research is very limited on the long-term effects of e-cigarette smoking, some studies have concluded that they can increase the risk of addiction to drugs.

It will take time to prove or disprove this and other suggestive evidence. The question is, do you really want to take the risk in the meantime? Do you think it’s smart to indulge in something that could be a trigger for your addiction, however small the chances are?